Tampa royalty and Top Dawg Entertainment’s first female rapper, Doechii, releases her latest EP she / her / black b*tch. Compacted with 5 songs, Doechii does nothing but tease us with captivating verses, complimenting features with production that is pure ear candy. It’s a quickie nonetheless, something to hold us over till we get what she really has in-store. With animated and rambunctious lyricism, raps that are unhinged, beats that are quirky and diverse, Doechii is showing she has such a deep musical pallet.

On “Swamp Princess” she taps in with Rico Nasty, giving us a collaboration that we didn’t know we desperately needed. Rico’s crazed sound pairs so well with Doechii’s off-the-wall style. They’re both at their best here. On “Bitch I’m Nice”, released in July, she delivers a supersonic dance record. On “Bitches Be”, there’s bit of a SZA influence as if it should’ve been featured on her debut album CTRL. On “This Bitch Matters”, things take turn where she’s more reflective and sensitive. Lastly you have “Persuasive (Remix” with SZA, a feel good record where the TDE label-mate enhances the song taking it to another level.

As said in her press material about her debut EP:

“Many times I’ve been referred to as a “bitch” as a way to gaslight me out of certain spaces, something I think many people can relate to in one way or another,” says Doechii. “Lots of people will call you various names for doing something differently. “So I decided to take ownership of the ‘black bitch’ and title my EP she/ her/ black b*tch and reclaim that motherf***ing power,” Doechii continues.” So if you’ve ever been put down for being
yourself, just remember you’re powerful and unapologetic- these songs are for you.”

Ultimately, it’s exciting to see where the Tampa native will take things next with her unprecedented and genre-bending sound. You can listen to her major label debut debut EP above and while you’re at it, check out
BRA-LESS and Oh The Places You’ll Go. 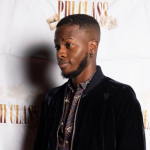